Book Review: ‘From This Moment On’ by Shania Twain 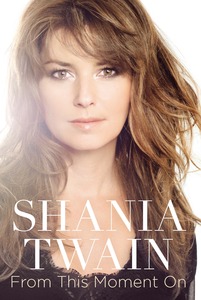 You know those books that you have wanted to read since they came out and you remember when they came out but you just never got around to reading them for whatever reason? Shania Twain’s autobiography was one of those books for me and 2018 is the year that I finally got around to reading it, which is good, considering it came out in 2011… 7 years ago. It was even the first book I added to my to-read shelf when I first joined Goodreads in 2015. Better late than never!

I remember when From This Moment On came out in 2011 because that year was the start of a new beginning of sorts for Shania Twain, who had retired from performing in 2004 from a weakened singing voice and at one time believed she would never sing again. On top of already suffering from a weakened voice and choosing to give up performing, Twain’s longtime husband and producer Mutt Lange was infamously revealed to have been cheating on her with his assistant and Twain’s close friend; they divorced in 2010. She later underwent intense vocal rehabilitation, some of which was chronicled on the OWN miniseries Why Not? with Shania Twain in 2011. This was the year that it seemed like Shania Twain was getting back on her feet: she remarried to the ex-husband of her ex-best friend (isn’t it funny how things work out?), did the series on OWN, released her first single in 6 years (“Today Is Your Day,” which she wrote to cheer herself up), and published her autobiography. I remember this year fondly because even though I never got around to reading From This Moment On until now, Shania Twain was the first singer I ever loved, so I have always followed her career closely and was happy to see that she was getting back into performing after having more than her fair share of vocal and personal pains.

From This Moment On will be entertaining and interesting to any Shania Twain fan, especially those who were already familiar with her rough childhood and upbringing (of which she goes into significant detail in the first part of the book), but it’s not a memoir: it’s an autobiography. I’ve seen it described as both, and it’s definitely not a memoir. In fact, I probably would have enjoyed it much more as a memoir, because even though I loved getting insight into the life of the first singer I ever loved, it got boring and dragged at times because the book is literally her life story from birth until 2011. It might have been a little more interesting if it had been in memoir form, with chapters being dedicated to different stories from different periods of her life, like most celebrities do in memoirs. It also would have made it a little shorter; 416 pages isn’t outrageously long, but it took awhile to get through it. But, you can tell that writing From This Moment On was therapeutic for Twain in many ways; she emphasizes the importance of telling the story of your life in the introduction, whether it’s for people to read or just for yourself to get a sense of how far you’ve come in life. So I appreciate that and what this book hopefully brought her in terms of achieving some inner peace (I also hope she’s sought a lot of therapy since reaching adulthood because, jeez, rough childhood and upbringing is a huge understatement).

I’m also happy I chose to read From This Moment On when I did, because last September also happened to be when Twain released her first studio album in 15 years, Now. Even as I was happy that she returned to performing in 2011 and seemed to be getting back on her feet, I for one was eagerly waiting to see if new music would ever come. And especially since she discusses her vocal difficulties in the book, it made me appreciate the Now album in a different way. I wasn’t blown away by the album but accepted what it was as something enjoyable enough (full review here), because it’s not like someone like Shania Twain, one of the best-selling artists of all-time, needs to prove herself anymore. But a lot of people, myself included, were just trying to make sense of her new music, because it’s nothing like she’s ever released before (it’s also her first album where Twain has assumed an integral role in its production, and the first since her 1993 debut album to not be produced by her longtime producer and ex-husband Mutt Lange). So you had to know it wasn’t going to be the same, for several different reasons. Twain has since disclosed in interviews that it was difficult to make music without Lange, since it was the material he produced that she valued and was what made her a star, and that she has had to learn to accept that she is never going to be able to sing like she used to. So in that sense, I appreciate the Shania on Now as one who has seen the light at the end of the tunnel, found the rainbow after the storm, and producing and releasing what she describes as her most personal music ever. From This Moment On helped offer me insight into how she got to where she is today, for which I am grateful regardless.