Book Review: ‘Turtles All the Way Down’ by John Green 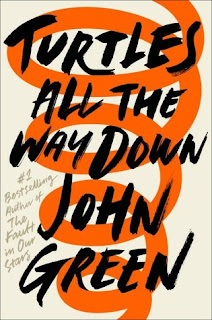 While this book does have some strong points, it ultimately read very lopsided and inconsistent to me. Why, you ask? BECAUSE THE PLOT IS SO DAMN RANDOM.

Turtles All the Way Down is about 16-year-old Aza (who struggles with OCD and anxiety) who, along with her friend Daisy, decides to solve the mystery behind the disappearance of Russell Pickett, the billionaire father of a boy Aza knew when she was younger and who she clearly still has a crush on, Davis Pickett. But the book isn’t really about his father’s disappearance – it’s more about Aza’s budding relationship with Davis, or is it about her struggles with mental illness? Oh yeah, her annoying friend also writes Star Wars fanfiction, in case that’s important (spoiler alert: it’s not.) It’s hard to tell what the book is truly about, because it’s really about all of these things, and they don’t exactly all work well together. The blatant randomness of Turtles All the Way Down constantly brought this Tumblr post to mind: 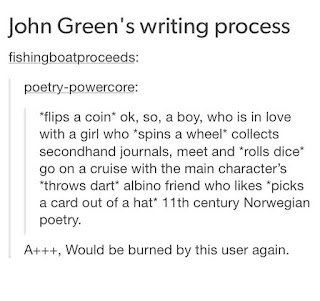 Like, seriously. I’m convinced that this is actually how John Green makes creative decisions because his latest novel (and first since the largely popular The Fault in Our Stars), is a bunch of random plot ideas thrown together and, like I said, they aren’t exactly working together to create the next best Great American Novel.

Turtles All the Way Down is well written and nicely executed, though. Don’t get me wrong. John Green is a good writer. There was never any doubt about that. The mental illness narrative and the struggle therein were particularly well written in this book. Green clearly knows how to write about OCD and anxiety in a realistic and believable sense, but the mental illness angle, while well written, didn’t really compute with the rest of the random and inconsistent storyline. I would have preferred if Green had spent more time developing his characters more and perhaps even the atmosphere/environment in which they lived.

I felt like I knew Aza, yes, because we were made to understood she suffers from OCD and anxiety and struggles with these “thought spirals” she can’t snap out of. Just because you tell us someone has a mental illness and then give us all these examples of how it affects her daily life doesn’t mean you’re properly developing your characters, John Green. Mental illness definitely adds depth to a character but you can’t just stop there and I felt like Green did, because he thought that was enough character development. There were elements of almost every character that he left unexplored when he could have developed it further – Turtles All the Way Down is barely 300 pages, and he could’ve used a bit more space to develop his characters beyond his random ass plotting. The only character I felt was developed beyond the surface level was Davis, but even then, his tendency to get emotional over the fact that everyone thinks he has everything because he’s rich but he’s actually missing a lot in life was way beyond cliché. Even as the plot was random and inconsistent, it also left too much unexplored for me to find it perfect or enjoyable.

In conclusion! The mental illness narrative was well done and the whole book is well written, because John Green is a good writer. However, the plot is extremely random, the characters are underdeveloped, and the book’s strong points don’t compute with the weaker ones to make the perfect novel.