Schitt’s Creek, the Canadian sitcom which wrapped its third season on CBC back in March, has become quite the strong comedy. And if you’ve watched only one episode, you’ll know that most of that strength comes from the beautiful David Rose, portrayed by Daniel Levy.

For those who are unfamiliar with Schitt’s Creek (now I’m giving you a reason not to be, just by the way, go watch it; like, right now), the comedy follows the eccentric Rose family after they’ve been robbed of all their material possessions. The only thing left to their name happens to be a small town called Schitt’s Creek, which patriarch Johnny Rose (Eugene Levy), a business mogul, once bought as a joke. The rest of the Rose family consists of his wife Moira (Catherine O’Hara), a former soap opera star, and their grown, pampered children, David and Alexis (Annie Murphy). The main thing that makes Schitt’s Creek so funny is not only the solid writing and performances but the fact that the comedic situations simply arise by the character’s personalities. The comedic value comes only from that; the situations are not thrust upon them for that effect, the comedy comes simply from their environment. But, honestly, the main reason I love the series so much is David. He is a high-maintenance, slightly incompetent rich boy (well, former rich boy) who still struggles to comprehend life outside of the high life of New York City, but you love him for it anyway. Not only that, David is one of the only pansexual characters I’ve seen portrayed in such an oblivious, realistic way. When the series first started, I thought to myself that David must be gay, just based on his mannerisms, impeccably unique style and just his sass (all of which made me fall in love with him instantly), but halfway through the first season, we find out that David has had boyfriends and girlfriends, and no one seems to have a problem with that. Later, in a scene in a liquor store between David and sassy motel manager Stevie (Emily Hampshire), David’s pansexuality is addressed very poignantly. Stevie says that she likes white wine, and she wasn’t sure if David liked white or red. David replies that he’s been known to like white, red, and even the occasional rosé. Where’s Schitt’s Creek‘s Emmy for Outstanding Comedy Series for that scene alone?

The fact that I not only thought that David was simply gay but that I didn’t even consider for a second that he might be pansexual, or even bisexual, shows how much television is lacking in realistic LGBTQ+ characters. David has great chemistry with Stevie, and I would totally be okay with them becoming more than friends somewhere down the line, if that’s the way they chose to write it (they almost went there in season 1). Also, I also kind of enjoy that they didn’t still don’t really address David’s sexuality blatantly. It’s his business, and we’re all sick to death of painful coming-out stories, no matter how powerful. To hell with heteronormativity. On to bigger and stronger things.

Pansexuals aren’t as well-understood as other parts of the LGBT, so I applaud Levy for portraying (and writing) David in a way that not only makes us love him for his sass, but also for making him pansexual. Because, honestly, David can date a guy or a girl and we’d all be okay with it because, if you watch Schitt’s Creek, you know he’s at least 75-80% of the reason you watch each week. C’mon. Don’t lie. 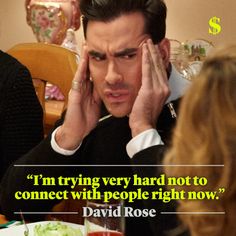