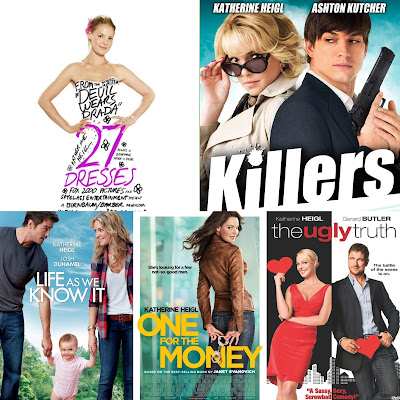 Katherine Heigl has had her fair share of TV and film roles. Whether she’s being a bridesmaid and falling for James Marsden, raising someone else’s kid with Josh Duhamel, or slaying as Izzie on Grey’s Anatomy, we can’t deny her loveable charm. Here are 5 of her romantic comedies ranked from weakest to strongest:

5. One for the Money (2012)
Heigl stars as Stephanie Plum, who finds herself unemployed and broke, forced to work for her cousin’s bail bondsman business as a bail enforcement agent, despite having no training nor experience. She is tasked with finding Joe Morelli, a former cop wanted for murder and who also happened to know Stephanie in high school…and took her virginity. Not even Ms. Heigl could save the terrible plot, not to mention she is not convincing as a brunette. It is most probably her worst comedy flick.

4. Killers (2010)
Heigl stars alongside Ashton Kutcher, a sexy stranger she meets while vacationing in Nice, France with her parents, portrayed by Tom Selleck and Catherine O’Hara. The thing is, her handsome guy is an assassin. Three years pass before she learns the truth, leading them on a wild goose chase with everyone around them seemingly working for the enemy. Despite the ridiculous plot, Killers is made enjoyable solely by the performance of its star-studded cast.

3. The Ugly Truth (2009)
Heigl stars as Abby, a producer of a morning television show in California. Gerard Butler co-stars as Mike, who does a segment called “The Ugly Truth” on a local talk show. Mike tries to help Abby see the flaw in her dating, leading to quite the pandemonium. Heigl certainly shines through the rest of the cast in this one, including Butler, who I found to be the worst part of The Ugly Truth.

2. Life As We Know It (2010)
Heigl stars as Holly, a single bakery owner and chef, alongside the dreamy Josh Duhamel as Eric Messer, set up on a disastrous blind date by their mutual best friends. When the mutual friends in question are tragically killed in a car accident, they left custody of their toddler, Sophie, to Holly and Messer…together, forcing them to put their differences aside for Sophie’s sake. Despite the stereotypical, predictable plot, Heigl and Duhamel dazzle as screen partners, making Life As We Know It quite enjoyable and charming.

1. 27 Dresses (2008)
Heigl stars as Jane, a woman whose main pastime is being a bridesmaid for other women. Malin Akerman stars as her younger sister Tess, known for being popular with the opposite sex. Not only that, Jane is in love with her boss, George (Edward Burns), and can’t get a hold of herself long enough to tell him how she feels. Unfortunately, she can’t get it out before Tess falls for George, and guess who agrees to be her maid of honor? James Marsden also co-stars as a newspaper columnist who covers the wedding section whom soon takes a liking to the bridesmaid of the century. 27 Dresses is arguably Heigl’s best and strongest romantic comedy. The storyline and plot are original and fun, the performances are solid and no one can deny the chemistry Heigl shares with each and every co-star. The question remains, why hasn’t the 27 Dresses magic been replicated in any other of Heigl’s film roles? Quite the travesty.