Is Madonna Redefining What It Means to Age in Pop Music? (Album Review: ‘Madame X’) 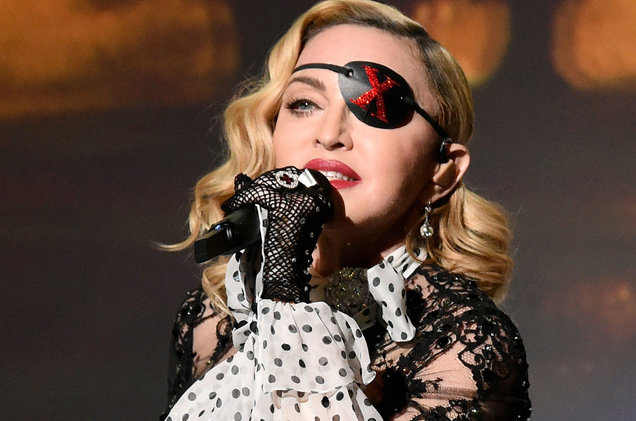 A few weeks back, when Madonna released her latest studio effort, the sonically eclectic but highly experimental Madame X, diehard fans were of course along for the ride. The album is “a wild, political, romantic ride through world music” wrote at least one critic and longtime diehard. The Guardian commended Madonna’s “solid confidence in her own aesthetic decisions,” among other generally positive reviews. But a new Madonna album also meant the same age-old commentary surrounding just that—her age. Criticisms over Madonna still attempting to push boundaries into her sixties is nothing new. It’s been around since she was in her thirties, if not longer. But if we take a closer look at the current commentary surrounding Madonna—pretty much the only person worthy of the title Queen of Pop—it seems we’ve somehow let her down by allowing an era-defining, groundbreaking star who has contributed more to popular culture than anyone else in recent memory to become perceived as a has-been and even a desperate wannabe. Where did everything go wrong?

As far as the current discourse goes, I suppose the recent perceptions of Madonna is not entirely surprising, given that the age of social media and staunch political correctness has ushered in another age of un-forgiveness, especially surrounding celebrities. Whether we like it or not, age defines a majority of the politics around pop music, and whether Madonna likes it or not, her age has come to define most of her current image—much to her disdain, and to that of her fans. She’s “being punished” for continuing to work, in her own words—something that other stars that once would have been considered her peers do not have to worry about. Elton John, Paul McCartney, Tina Turner, Cher, and even Shania Twain have since continued being successful past their so-called heydays as “nostalgia” acts, something that Madonna continues to be hell bent on avoiding. On one hand, it’s admirable of her to continue refusing to fit into one set format, one set genre, or one set image, no matter how old she is. But on the other, it’s not surprising that Madonna’s efforts at continuing to play what is called a “young person’s game” has managed to alienate her from both her original demographic, and the current youth-oriented audience that new and fresh pop music is largely marketed to. In a way, Madonna has gotten so good at not fitting into the format that she almost doesn’t fit in anywhere anymore—which, for a pop culture icon and the Queen of Pop, means we must have failed her somewhere along the way. As much as we all wish we could justify our supposed inability in investing in Madonna anymore on things like she’s not interesting anymore, she’s boring, or she’s not doing anything we haven’t already seen before—all those things are untrue. It’s undeniable that anyone else, either on the current pop scene or a past one, has made an album as uniquely bizarre as Madame X. We can all say what we want, but there’s no denying that there are few other artists in history who have continued to create stunningly provocative visuals—just watch the music video for “Dark Ballet” if you don’t believe me—consistently throughout their career without ever faltering. But some listeners just can’t seem to invest in Madonna the same way anymore, no matter what she does—and Madonna has taken notice. Unlike other era-defining icons who all came to accept that they didn’t have anything to prove anymore, the Queen of Pop now thinks of herself as an underdog again—a narrative and image that only alienates her further. Maybe Madonna could have managed to usurp ageist expectations and commentary by her talent and ability to push boundaries and someday achieve a new hit single on the Billboard Hot 100, but she has instead decided not only to play the underdog card, but to pointlessly feud with Lady Gaga and chase new trends that don’t always fit her. As if ageism wasn’t enough, Madonna has managed to make her instincts come across as not as “on point” as they once were—which can only be expected when you’re trying your damnedest, no matter how old you are, to play a “young person’s game,” a.k.a. pop music, when you’re not young anymore.

The trouble regarding Madonna’s role in youth culture really only began within the last decade, given that her final two studio albums with Warner Bros., Confessions on a Dancefloor (2005) and Hard Candy (2008), still generated genuine commercial success with singles that received mainstream airplay and attention. It was only once she returned with MDNA in 2012, an EDM-focused album and her first release under a three-album deal with Interscope Records, did she begin receiving polarizing reviews that said she was “horribly clichéd” and trying too hard to sound like a teenager—and her newfound collaborations with Nicki Minaj did not help her case. Rebel Heart (2015), while lyrically and vocally stronger than MDNA, also spent an outrageous amount of time trying to establish her in the new era of 2010s pop—one where Madonna assumed that kids listening to music on their iPhones wouldn’t have heard of her. The end result was tracks like “Bitch I’m Madonna,” another collaboration with Minaj that made Madonna sound like she cared more about her ego than trying to relate to a new generation of youth-oriented music. She came across as leeching off the influence of people like Nicki Minaj or Ariana Grande in order to brag about herself, and suddenly Madonna appeared to become more self-referential and more self-obsessed than ever before—in a way that came across more as narcissism than empowerment. On Madame X, she wants us to believe she is a victim and a survivor who has overcome torture, and despite her still-provocative visuals, their religious imagery appears to be an ode to the “Like a Prayer” days. Madonna wants to project stamina and resilience—which she does—but her white privilege and occasional cultural appropriation leads to ego-driven vulnerability emerging between the lines. I can only imagine how difficult it must be for a global icon who, even now, has managed to generate cross-generational popularity and success, especially in the ever-changing confines of popular culture, to accept that she no longer holds the proverbial keys to the castle. Especially in the digital age, trendsetters come and go remarkably fast. What’s cool today might no longer be cool by tomorrow morning. But still, there’s no one as ruthless as Madonna to have lasted this long, continuing to push boundaries that nobody even knew were there. If anything, Madonna has come to prove that her biggest strengths are in fact persistence and resilience. She became our punching bag because no one else had the persistence or resilience to be. Most of her original peers eventually decided to grow up (Cyndi Lauper, Duran Duran, or Pat Benatar), faded away altogether (Belinda Carlisle or Sheena Easton), or have since died (Michael Jackson, George Michael, Prince, or Whitney Houston). Even Cher, who has managed to retain relevancy in a new era of RuPaul’s Drag Race fanatics, appears to have made peace with her diminished role in youth culture, given her nostalgically campy album of ABBA covers from last year. “There are no living role models for me,” Madonna told British Vogue earlier this year. “Because nobody does what I do. And that’s kind of scary.” Her only living equal would probably be that of Janet Jackson, whose own career suffered a decline for the better part of the 2000s following the infamous nip-slip, and the puritanical reactions and banishments that followed. But even she managed to get a single on the Hot 100 last year, and both Mariah Carey and Jennifer Lopez—both nearing fifty and who both don’t take nearly as much heat as Madonna does—are still viewed as hard-working and successful. Could Madonna be redefining what it means to age in pop music? Maybe, but that remains to be seen. And even if she was, Madonna probably wouldn’t get the credit for that, either.

In the last decade, Madonna has, on more than one occasion, made it difficult to be a fan of hers. Being a fan also means having to defend her questionable decisions or comments, and sometimes those things are merely beyond defense. But as hard as she makes it, the fact that she’s still around and still managing to push whatever boundaries she can find by producing an album as experimental and strange as Madame X just goes to show that she clearly does possess stamina, persistence, and resilience. Where she continues to fall short is wanting to have it both ways: she wants to be the Queen of Pop and hailed as such, but she also wants to be the scrappy underdog whom youth culture will embrace, and that is only pushing her further away from a narrative of relatability. If anything, all the time spent talking about how Madonna is still going at sixty means we haven’t stopped long enough to realize how interesting she still is. Personally, Madame X doesn’t work for me. It’s a bit too bizarre and sonically messy for me to invest in it, but even with the ego-driven, self-referential lyrics and imagery, I can appreciate that Madonna is still going the extra mile all these years later. I believe that she would still be going the extra mile even if she wasn’t working overtime to keep herself relevant. Where we have truly failed Madonna is that we continue to spend too much time doubting her talent and abilities as she’s gotten older, because if we were to remove the ageism and pop music politics, I think we would all have a bit more of a window into the interesting and groundbreaking artist she still is.